Home » FAQ » Hornet vs. Wasp: What is the difference between hornet and wasp?
FAQPets & Animals

Hornet vs. Wasp: What is the difference between hornet and wasp?

Hornet vs. Wasp: In This Article We Will Discover The Key Differences Between Hornet and Wasp, Their Similarities, Pros & Cons, And Answer Some Of The Frequently Asked Questions (FAQ)
29
SaveSavedRemoved 0 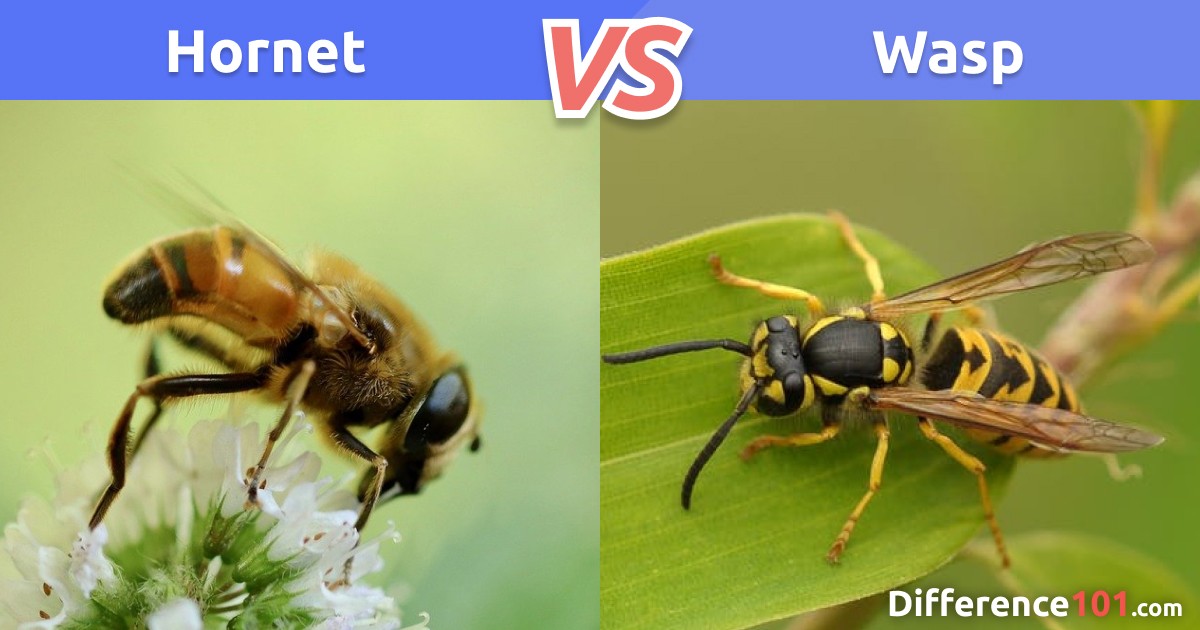 Though wasps and hornets belong to the same family yet they differ in a few aspects. The biggest difference between wasp and hornet lies in their size with wasp being the smaller. Hornets can reach up to 2.2 inches in length while wasps range between ⅓ to 1 inch only.

What is a wasp?

A wasp is a winged insect with black and bright yellow rings across its body.

What is a hornet?

Hornets are the largest wasps featuring reddish-brown heads and golden abdomens with dark brown stripes over them.

Looking at the similarities between a wasp and a hornet

How do you kill hornets?

The easiest way to kill hornets is by spraying a strong hornet killer, like Spectracide Wasp and Hornet Killer, on their nest. Such sprays can be easily bought at a local grocery store. To stop the further infestation, also spray some hornet dust on and around the nesting site.

Will a wasp sting me if I stay still?

If you stay still, the wasp won't sting you. Wasps fly off if one does not move at all as they sense no fear from you. Their stings are an action of their defense mechanism.

Is a yellowjacket a wasp or a hornet?

Yellowjacket is neither a wasp nor a hornet but a separate species belonging to the same family. Considering hornet vs. wasp vs. yellow jacket, a yellow jacket showcases similar colors like that of a wasp but it is shorter, thicker, and has black antennae unlike wasps with orange-tipped antennae. Their flight is similar to that of a hornet’s as they tuck their legs under their bodies while flying.

How far will a yellow jacket chase you?

A yellow jacket would chase you for around 50-100 feet or several yards. But outrunning them is almost an impossible task as they fly at nearly 8 miles per hour. Also, instances have been reported where people submerge themselves in water to protect themselves, only to find the yellow jacket waiting outside to start the chase again.

Do wasp sting you for no reason?

Wasps aren’t known to attack unprovoked. They sting only when they perceive you as a threat to them or their nest. If a wasp stings you, there’s a good chance that you have provoked it somehow either by getting closer to its nest or otherwise.

How do wasps see humans?

As per a recent study conducted on their cognitive abilities, it has been found that wasps can recognize human faces (Ref.1). Though they have a low-resolution vision, they have a photographic memory that lets them see and remember humans.

What scent do hornets hate?

Hornets are known to hate the scent of peppermint. A few other scents that are next in line are lemongrass, clove, wormwood, eucalyptus, thyme, citronella, and geranium.

What is the biggest hornet in the world?

Native to a few temperate and tropical parts of Asia, the deadly Asian giant hornet is the biggest in the world with a body length of about 1 ¾ inch.

How to get rid of wasps and hornets?

The best way to get rid of wasps and hornets is to use a wasp and hornet killer or pesticides built specifically for this purpose. Available in the form of sprays or aerosols, they are easy and safe to use even without professional help. This is because one can spray them 15-20 feet away from the nest, thereby, at zero risks of getting stung. Also, to deter them from coming back next season, make sure to spray some insecticide dust.

Listing the pros and cons of wasps and hornets

Tabulating the hornet and wasp difference for easier comprehension

Conclusion: Which is worse between a hornet and a wasp?

Hornets are thought to be worse as they can sting you unprovoked. Also, they are extremely aggressive. And those retractable stingers let them bite you multiple times when hostile. Contrary to this, wasps are not as aggressive and attack only if they are provoked. Also, only female wasps have stingers.

Jail vs. Prison: What is the difference between Jail and Prison?

Coronavirus (COVID-19): What We Know So Far

Pumps vs. Heels: What is the difference between Pumps and Heels?

AWD vs. 4WD: What's the difference between AWD and 4WD?

Catholic vs. Christian: What is the difference between Catholic and Christian?

NASDAQ vs. NYSE: What is the difference between NASDAQ and NYSE?

Send this to a friend